Eastern Bloc is a catwalk concert that addresses the communist past of Hungary, Slovakia, Poland, and the Czech Republic through an international co-production that draws on the music and visuals that defined the above-mentioned era in each of these countries. This is why the Budapest-based Soharóza choir invites artists (costume designers, singers, musicians, and a choreographer) from the four other countries to co-create a project on our collective past under the Soviet regime. 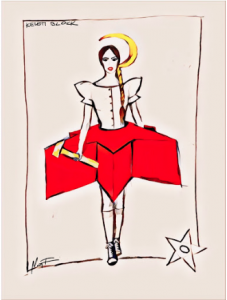 On the contrary to what has been done before, the idea is not merely to evoke the atmosphere of the communist era but to spark dialogue between the countries and also between different generations who have very different recollections of this period and to reflect upon how our common heritage lingers on in our present and in what ways it continues to pose relevant questions to our lives today. The storyline – to be defined in a collective work – will be inspired by the pertinent topics and themes we define together with the partnering artists and is then told episodically, through songs performed by the Soharóza choir and featuring singers who move around the catwalk-like stage in extravagant costumes inspired by the epoque-aesthetic. In this way, Eastern Bloc proposes a genuine collaboration of artists from the Visegrad 4, counting on their contribution to co-create and enrich the production. Our partners will be involved in the entire production-execution process and will be invited to actively take part in helping us take the performance on a tour following the Budapest premiere.

The premiere performance will take place in September 2022, at Trafó House of Contemporary Arts in Budapest, Hungary.

The project is supported by the Visegrad Fund.